This easy Paleo Apple Pie recipe is perfect for a family gathering or holiday celebration.  It has a simple almond flour crust, lightly sweetened apple filling and a gluten free crumble topping that pairs perfectly with vanilla ice cream or a dollop of coconut cream.

I took my kids apple picking for the first time this year and we ended up with a whole lot of apples.  22 pounds to be exact!

Thanks to my desire to get the perfect Paleo apple pie recipe, we have managed to eat almost all of them within a month.  (Yes, that's over twenty pounds of apples we have eaten!)

But no regrets; even the fact that I made this apple pie three times within a month to perfect the filling.

My goal with this Paleo apple pie was to make one that is low[er] in sugar, egg free, dairy free and grain free.  In other words, this apple pie recipe is actually healthy.  Yes, still sweetened, still a treat and still tastes amazing...but it has many nutritious qualities.

This Paleo apple dessert is:

In addition, the almond flour pie crust does not have to be chilled or blind baked in the oven.  Meaning, you make the crust, press it into a greased pie pan and add the filling and crumble topping.  Super easy right?

Let's talk about the crust for a minute.  The first time I made this Paleo pie crust it was perfect.  Yes, perfect!  That rarely happens when I bake something new, but it was meant to be I suppose.

There are a few things I absolutely love about this easy almond flour pie crust:

I mean, is there anything to complain about?  This truly is an exceptional grain-free pie crust recipe and it's really easy to make.

On to the filling... this healthy apple pie filling is made with fresh, organic apples and lightly sweetened with coconut sugar.  The type of apples I used were Golden Delicious and Criterian apples.  These are great baking apples because they are drier/less juicy.

Since this low carb apple pie filling is dairy free, instead of butter I used non-hydrogenated shortening.  This Paleo shortening bakes similarly to butter and is completely Vegan - I use it in quite a bit of my baking.

In addition, my recipe calls for tapioca flour (used as a thickener), lemon juice, cinnamon, nutmeg and salt.

All of these ingredients create a delicious Paleo and Vegan apple pie filling.

Pies are a big commitment.  Yeah?  So, I knew I wanted to have a super simple topping.  This is where the crumble comes in handy!

I chose an almond flour crumble topping that uses similar ingredients as the crust and is extremely easy to throw together.

This low carb crumble topping is slightly sweeter than the crust, but still not overly sweet.  Also, like the crust it is completely Paleo AND Vegan - grain free, dairy free and egg free.

How to Make a Paleo Apple Pie with Crumble Topping

I took step-by-step photos for how to make a Paleo apple pie so that you can easily follow along.  (See the trend here - easy, easy easy!)  So, here's the process:

Wash, peel and core the apples, then slice them into thin pieces.  Place the apples in a large mixing bowl and coat with lemon and the melted shortening.  Use tongs or your hands to mix the apples until they're well coated.

Set the filling aside and make the crust.

For the crust, combine all of the dry ingredients in a large mixing bowl.  This includes the almond flour, tapioca flour, ground flax, coconut sugar, cinnamon and salt.  Add in the shortening and water.  First mix with a fork, then use your hands to bring the dough together.

Set aside and make the crumble. 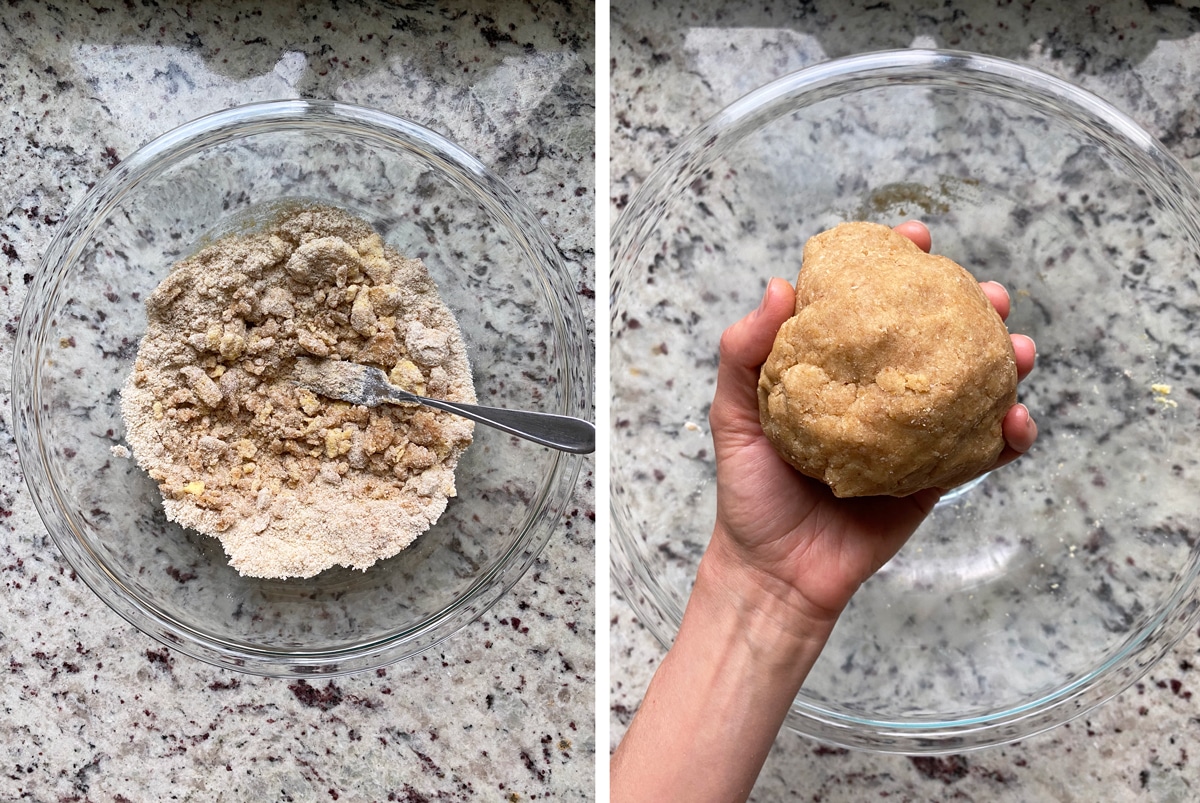 For the crumble, combine all of the dry ingredients in a medium-sized mixing bowl.  This includes the almond flour, ground flax, coconut sugar, cinnamon and salt.  Add in the shortening and water.  First mix with a fork, then use your hands to bring the dough together.  Using your hands, break the dough into small chunks.

Next, it's time to assemble the pie.

Pour the apple filling over the crust.  Be sure to leave behind any excess water/moisture - you don't want it to make the crust soggy.  Arrange the apples so that they are spread out evenly over the entire crust, filling in any gaps.

Next, use your hands to crumble the topping over the apples.  Lightly press the topping down. 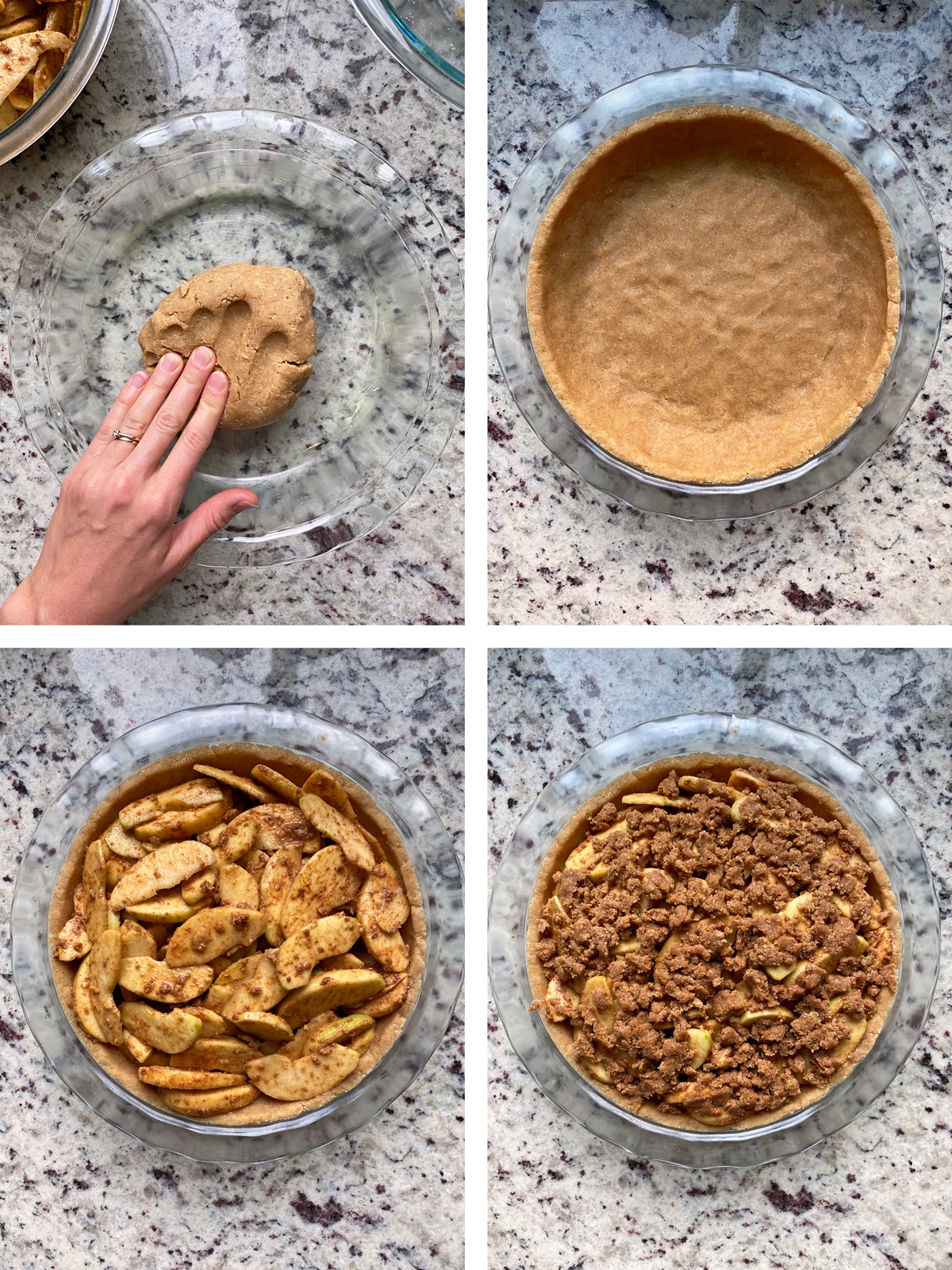 Place the apple pie in your preheated oven and bake at 425 degrees F for 15 minutes.  Then, cover the apple pie with foil and reduce the heat to 350 degrees F (keeping the pie in the oven).  Bake another 45 minutes.

After baking, remove the pie from the oven (remove foil as well) and let the pie cool to room temperature.  It's best to let the pie rest for at least 3 hours before serving.  Personally, I like the pie best after it's been sitting overnight in the fridge - the flavors seem to be even better the second and third day.

How to Store Paleo Apple Pie

This pie is best stored in the fridge.  It will keep at room temperature for a full day, but I recommend covering the pie and placing it in the fridge for best results.

Leftover pie can also be stored in the freezer.  Simply slice the pie and place it in an air-tight storage container in the freezer up to one month.  When ready to eat, defrost it on the countertop or in the microwave.

For best results, measure ingredients by weight (in grams) when given.

**I buy whole flax seeds and grind them in a coffee grinder, rather than purchasing pre-ground flax