This Healthy Pear Crumble is Paleo, Vegan and made without oats.  It is lightly sweetened and perfect topped with a dollop of coconut cream or scoop of vanilla ice cream.  A simple, crowd pleasing healthy pear dessert.

Pears don't get as much love as they should.  It must have something to do with their texture.  No?

I sometimes think of pears as a down-graded apple.  See, apples have it all - crisp, colorful and such a large variety to choose from.

Pears on the other hand... they don't taste great until they're soft.  But, let them get too soft and they aren't good either.  Pears aren't usually colorful; mostly green or brown.  And there are only a few varieties to choose from at most grocery stores.

But pears, don't worry - I still love you!  In fact, while I prefer eating raw apples to pears, I actually prefer baking with pears over apples.

Where do you stand??

This Vegan pear crumble, or crisp if you prefer to call it that, is a great way to add a little pear into your life.  It is:

My husband claims that he doesn't like pears, but he gave this recipe his full approval.  I promise - baking with pears is life-changing!  They taste 10x's better baked 😉

Here's what you need to make this easy pear crumble recipe:

All of these ingredients are both Paleo and Vegan friendly - perfect for making a healthy pear crisp.

How to make a pear crumble

This healthy pear recipe is super easy to make!

Next, make the filling.  To do this, chop the pears into cubes about ¼ inches, removing the stem and core.  There is no need to remove the skin.

Place the chopped pears into a large mixing bowl and coat with the remaining filling ingredients.

Pour the filling into an 8" x 8" baking pan and set aside.

Next, make the crumble topping.

In a large mixing bowl, combine all dry ingredients for the crumble.  This includes the almond flour, tapioca flour, flaked coconut, cinnamon and salt.

Then, add the wet ingredients.  This includes the shortening and maple syrup.  I recommend mashing the mixture with a fork, then using your hands.  Mix until barely combined - the crumble topping will be in chunks.

Crumble the topping over the filling, then press down lightly. 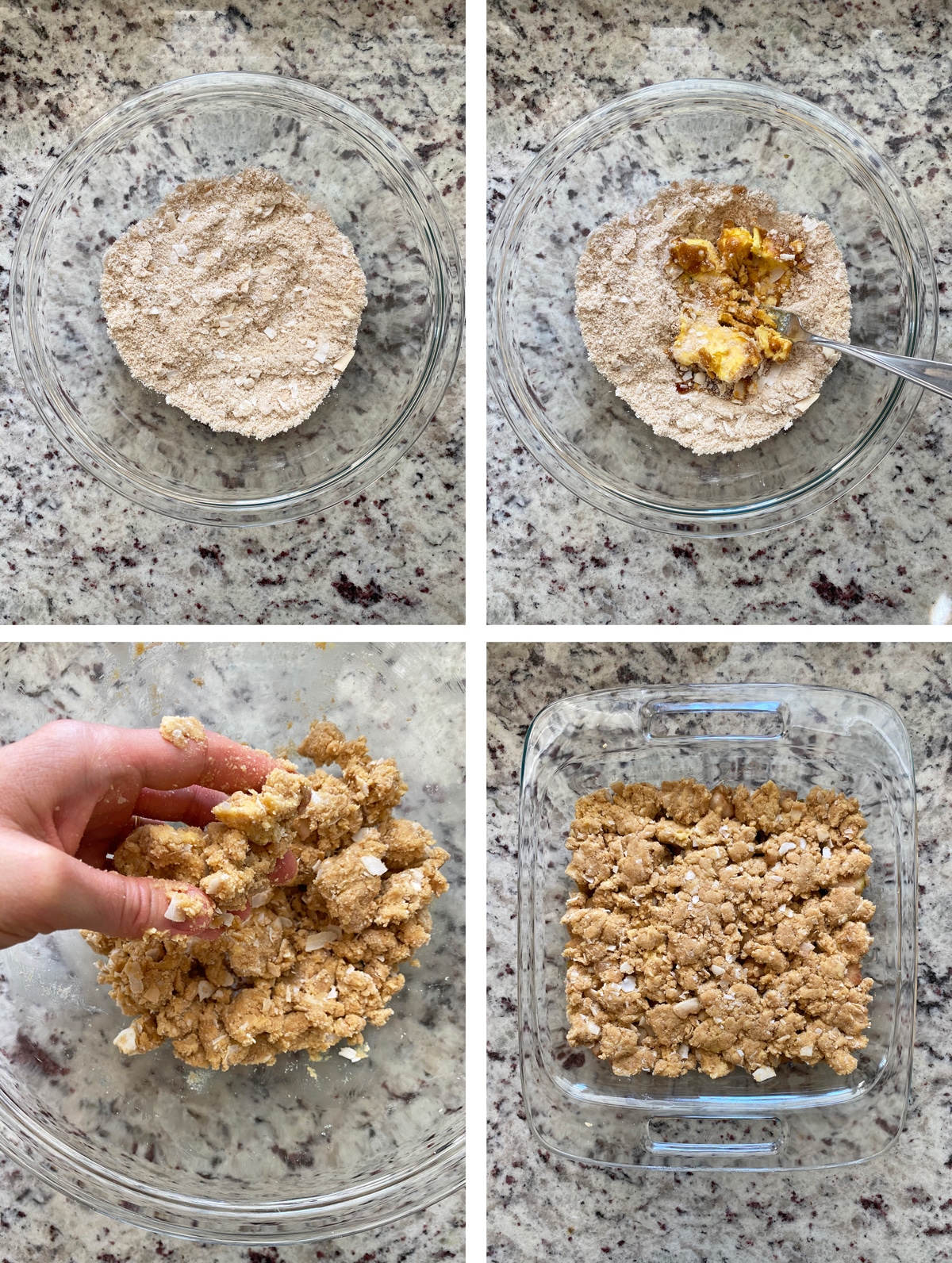 Lastly, bake the crumble.  Set the pan on the middle rack of your preheated oven and bake at 350 degrees F for 35 minutes.

After baking, remove the crumble from the oven, cool slightly and serve!  Or, cool to room temperature and chill overnight in the fridge.  This pear crumble tastes great warm or chilled.

After baking, this simple crumble recipe has a soft, sweet, juicy pear filling.  The topping will brown slightly and result in a crisp, crunchy, cookie-like topping.  The combination of the two is irresistible!

This vegan pear crumble can be eaten hot or cold.  Personally, I prefer the crumble after it has sat overnight in the fridge.  The flavors seem to be even better the second day.

Pair this crumble with vanilla ice cream, whipped cream or coconut cream for an extra special dessert.  (I added coconut cream and a sprinkle of bee pollen and cinnamon.)

For more Paleo recipes using pears, check these out:

This healthy pear crumble recipe is Paleo and Vegan and a great way to use up ripe pears.  It has a sweet, flavorful pear filling and a crisp, coconut and almond crumble topping.