These Healthy Cinnamon Roll Blondies are the next best thing to a gooey, homemade cinnamon roll.  They are made with almond flour and almond butter for the perfect low carb, gluten free and Paleo friendly cinnamon dessert! 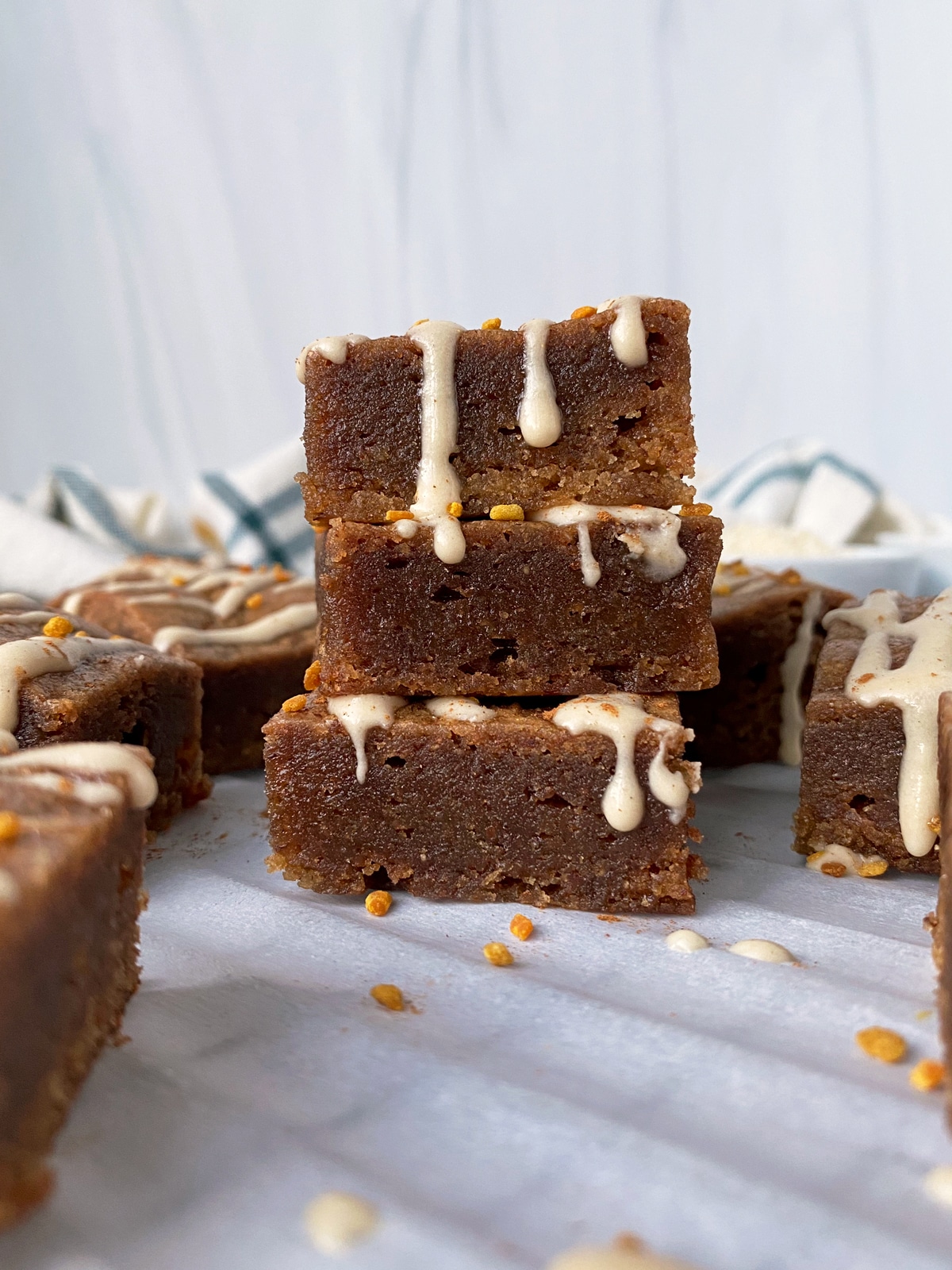 This post is sponsored by Blue Diamond, but all thoughts and opinions are my own.

Cinnamon rolls are great and all, but these Healthy Cinnamon Roll Blondies are where it's at!

This almond flour blondie recipe is so much easier to make than a batch of cinnamon rolls.  AND they taste amazing!

These healthy blondies are made with almond butter and Blue Diamond Almond Flour and drizzled with a simple coconut icing. 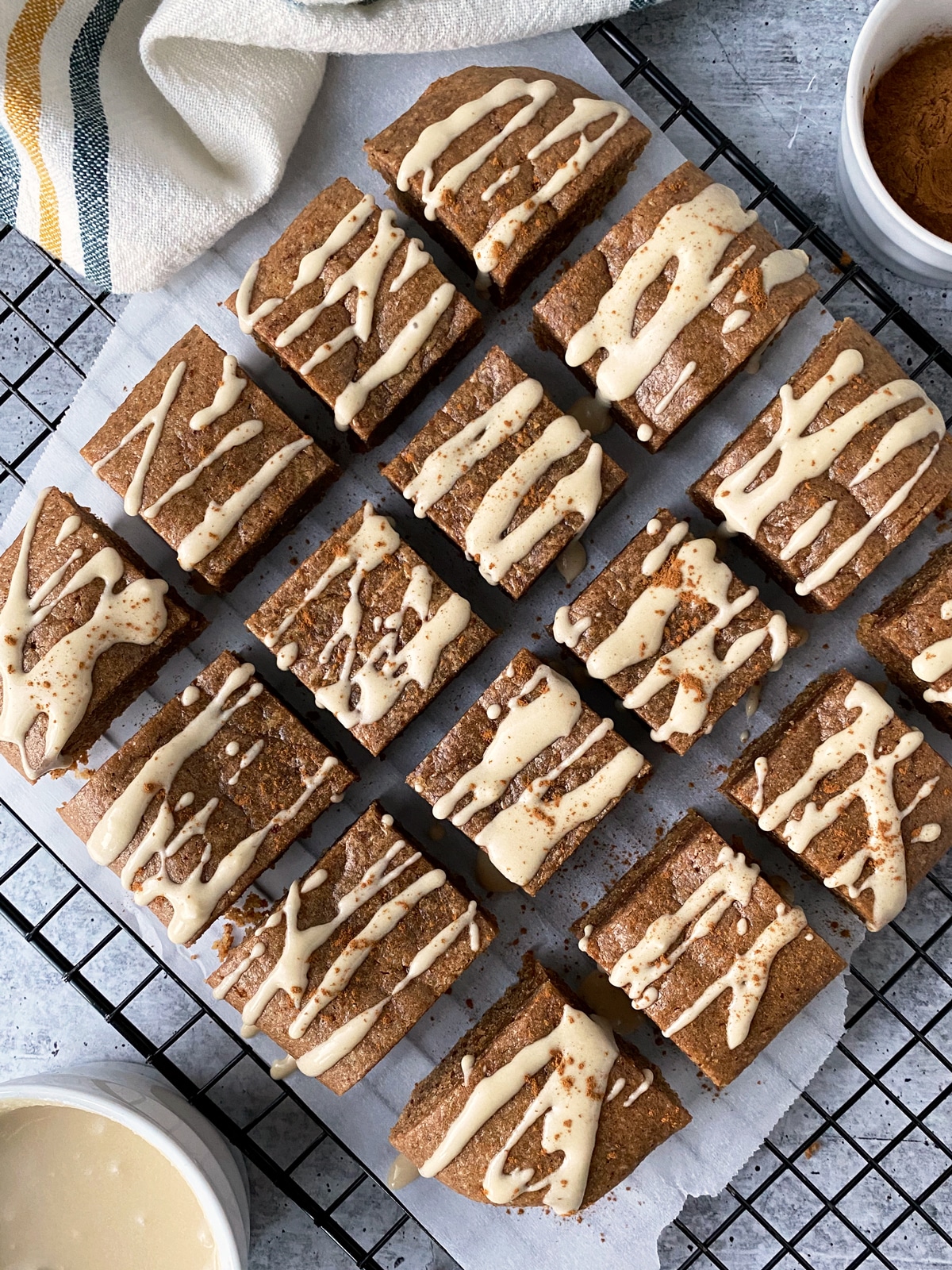 Here's the rundown on this easy dessert bar recipe...

These healthy Cinnamon Roll Blondies are:

They have the perfect texture - soft, chewy, and moist.  These blondies are not dry but gooey and literally melt in your mouth. 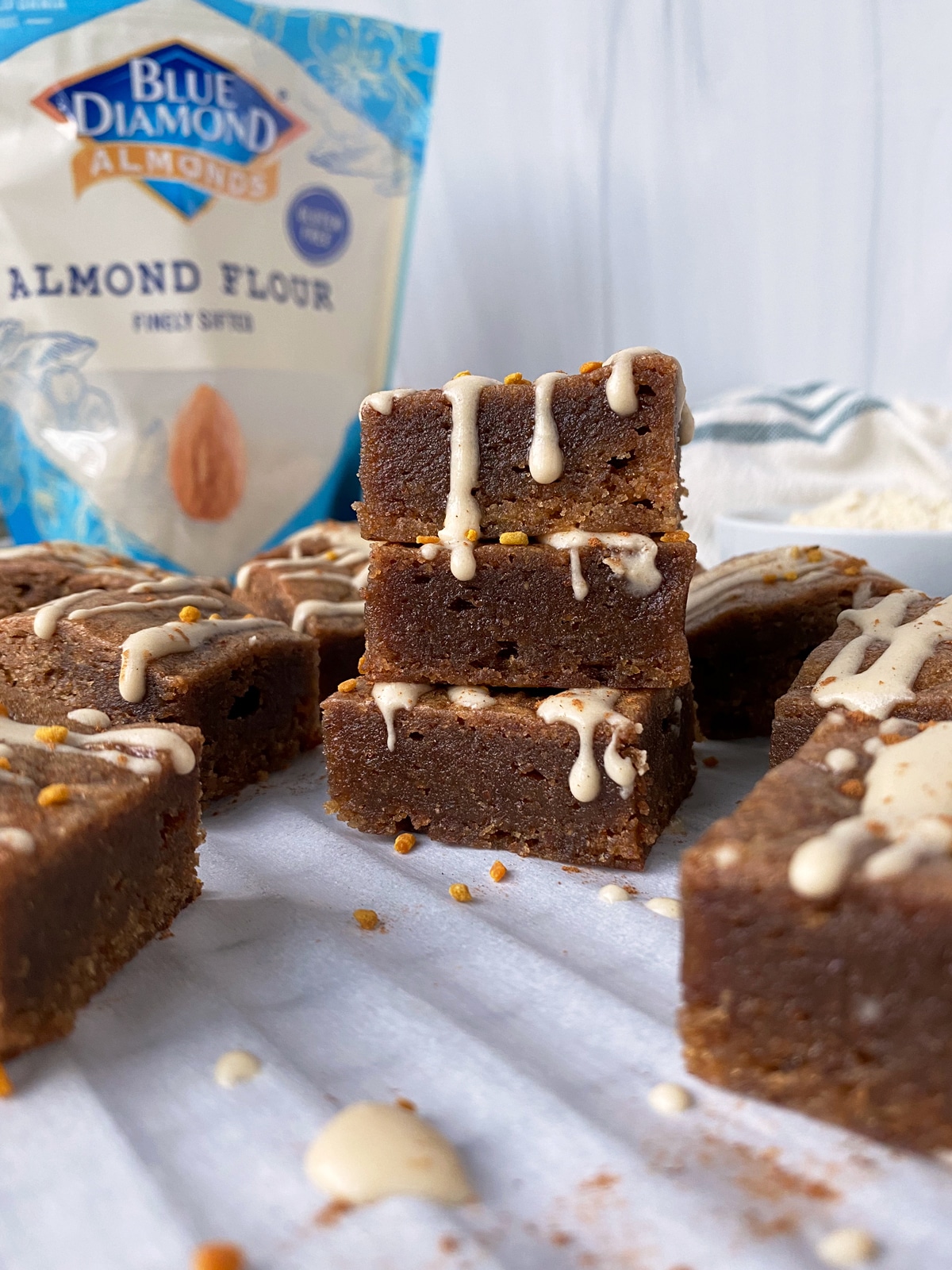 Part of what gives this easy blondie recipe the perfect texture is the use of Blue Diamond Almond Flour.  Their almond flour is finely sifted and made from 100% California-grown almonds.

I've tried many brands of almond flour through the years and I have to say, Blue Diamond Almond Flour has a superior quality.

I love how finely sifted it is - as finely ground almond flour is best for baking.  It creates a lighter, fluffier and overall better tasting baked good. 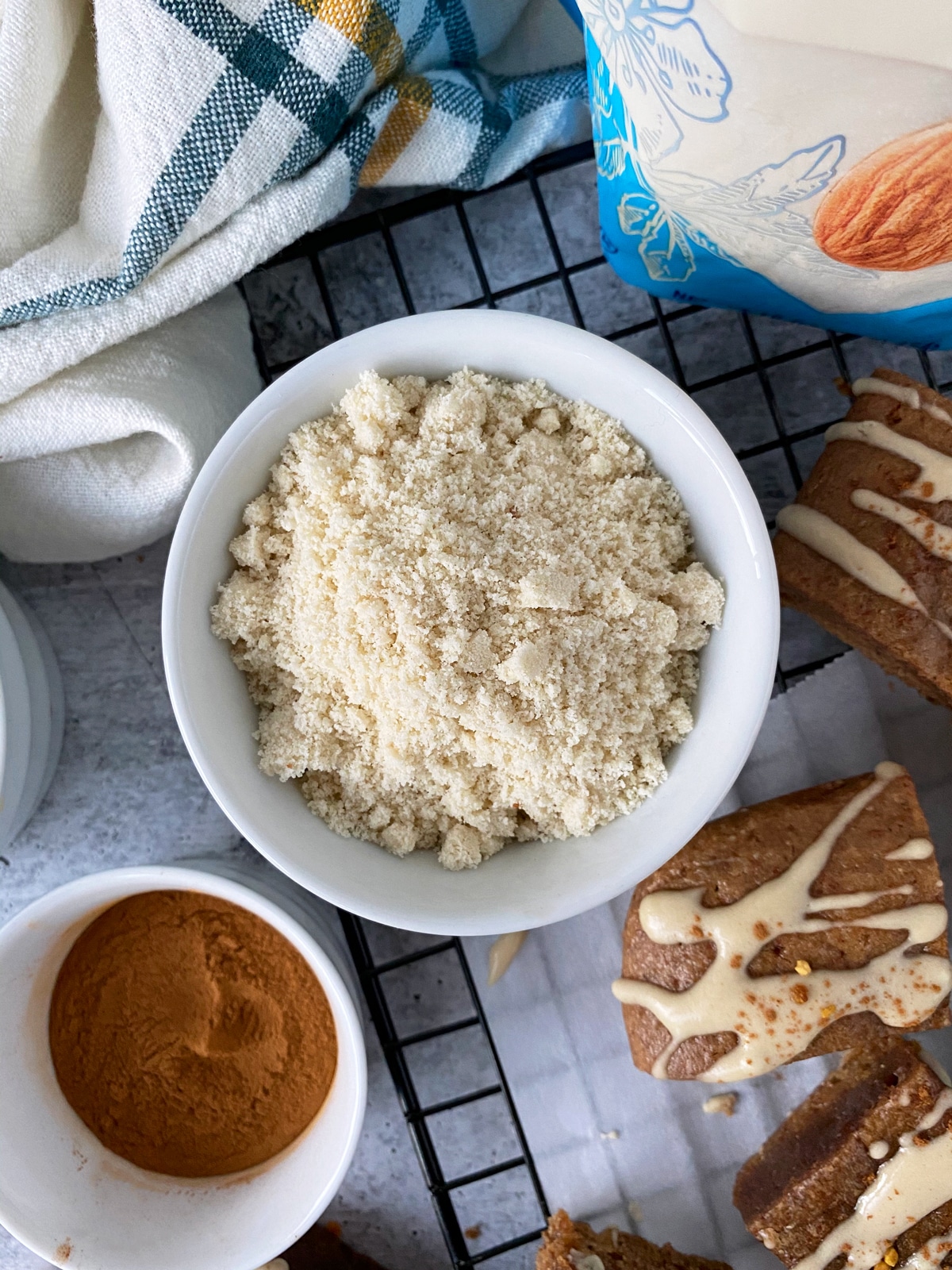 This almond butter blondies recipe only requires a few simple Paleo-friendly ingredients.  Here's what you need: 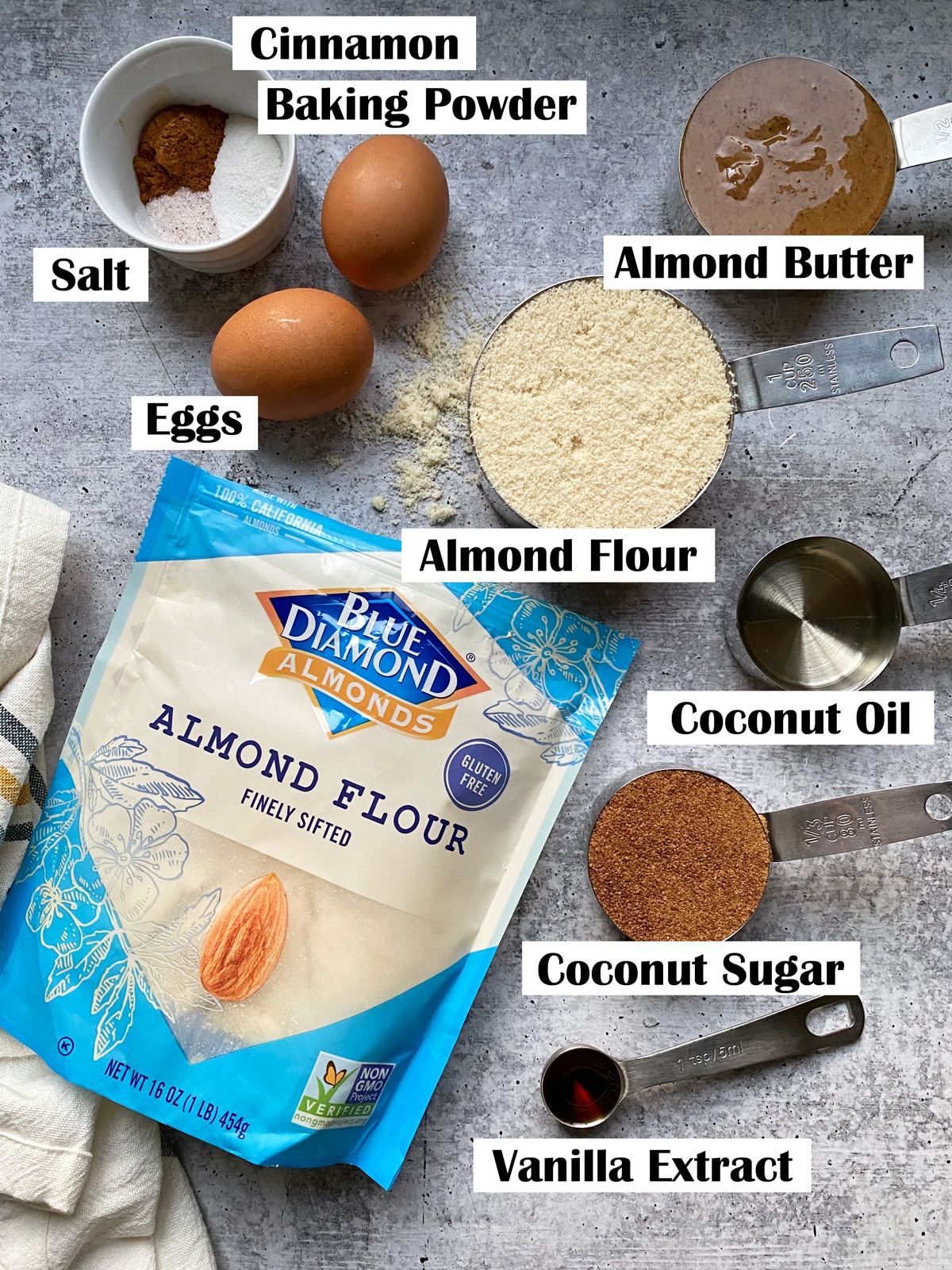 These Cinnamon Roll Blondies are completely gluten free, butter free and lower in sugar than your "average" blondie, which means a healthy dessert recipe that will make both you and your tummy happy! 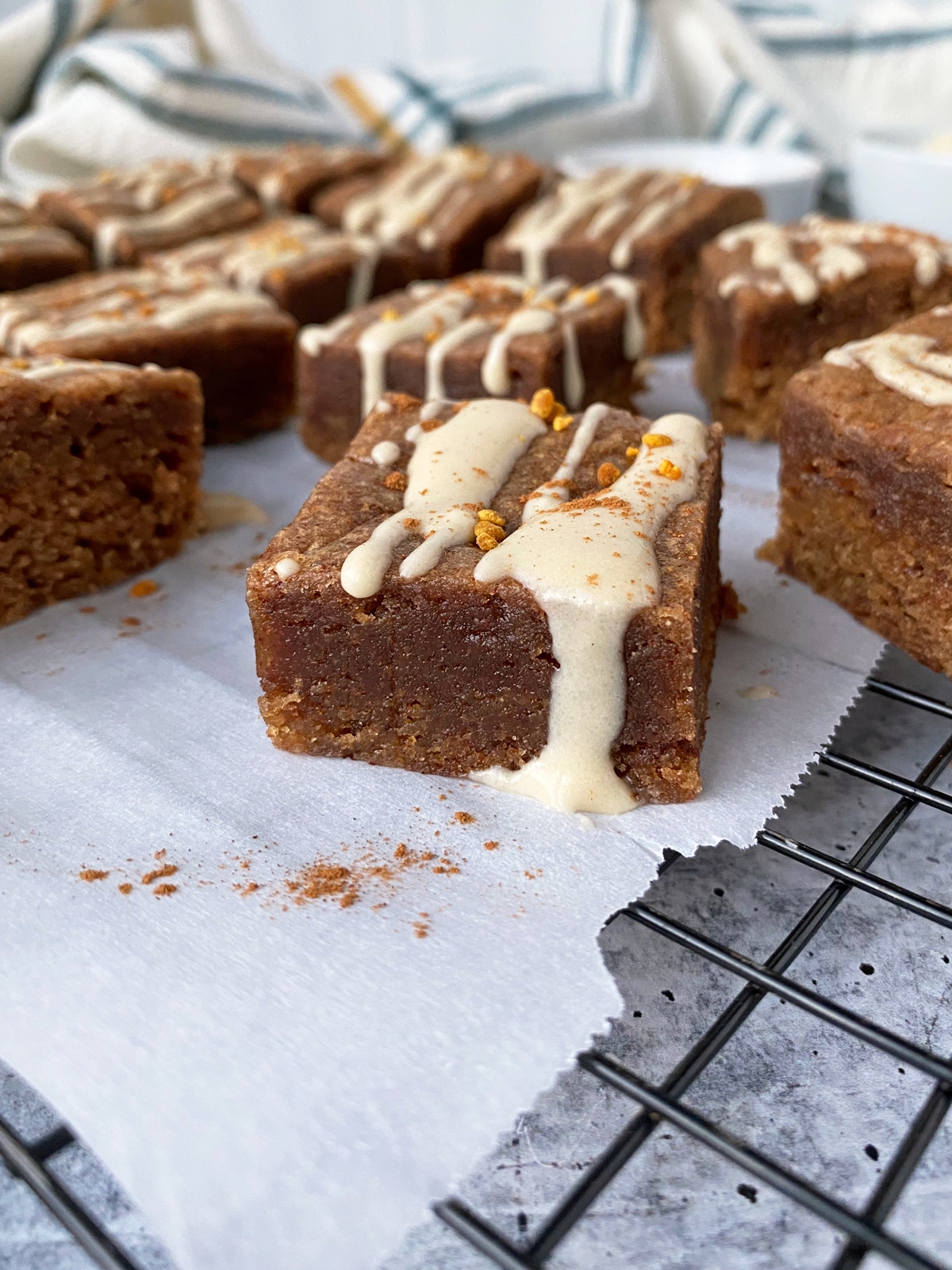 How to Make Cinnamon Roll Blondies

Making blondies is super easy!  All you need are a couple mixing bowls, a whisk, spatula and an 8" x 8" lined baking pan.

Before you begin making the batter, preheat your oven to 350 degrees F.

Next, whisk together the coconut sugar and melted coconut oil in a large mixing bowl.  Then, whisk in the almond butter, eggs and vanilla until smooth.

Next, pour the dry mixture into the wet mixture.  Use a spatula to stir the batter until it reaches a thick, uniform consistency (as shown below). 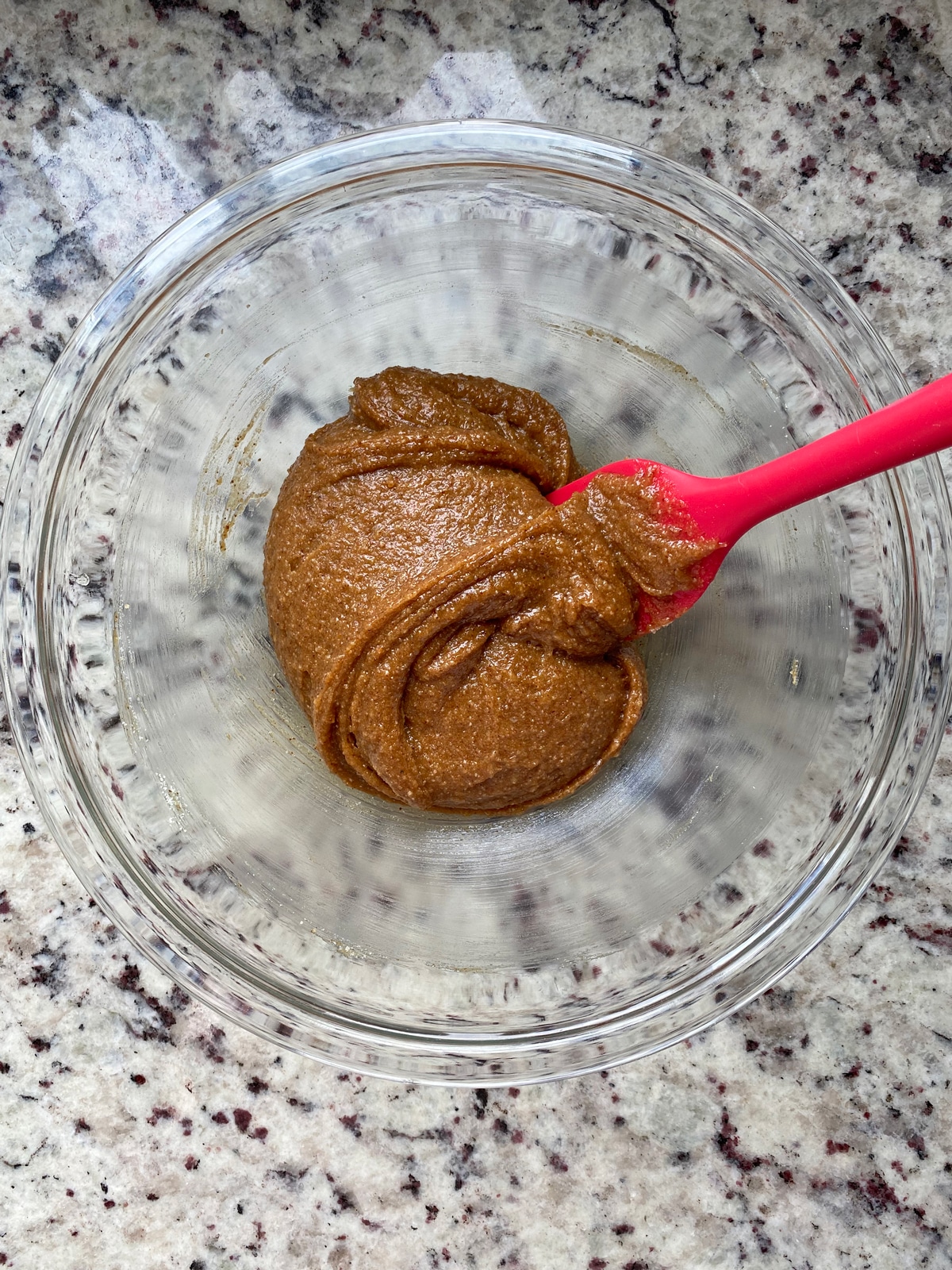 Put the blondies in the oven and bake at 350 degrees for 20 minutes.

After baking, remove them from the oven and let the blondies cool to room temperature in the pan.

Once fully cooled, make the icing.

Then, add the arrowroot starch one tablespoon at a time.  Whisk until smooth.  The icing should be thick and viscous.  If the icing is too runny, pop it in the fridge for about 20-30 minutes to thicken. 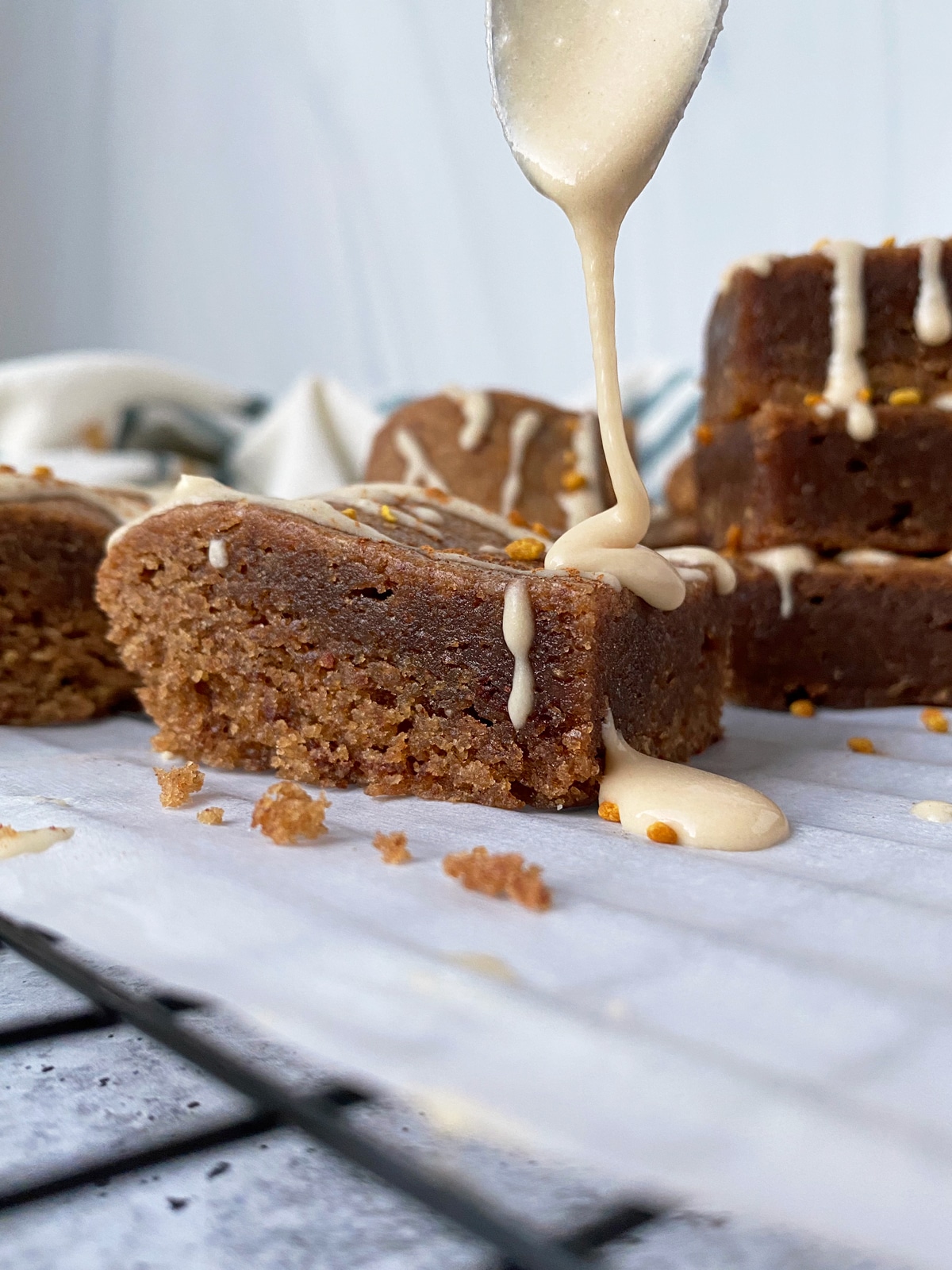 Lastly, cut the blondies and drizzle the icing on top.  You can add as much or as little icing as you desire.

As an option, sprinkle on additional cinnamon and some bee pollen.

I love baking with almond flour when I'm wanting a low carb Paleo dessert or baked good.  So, if you're looking for more healthy gluten free recipes that use almond flour check these out: 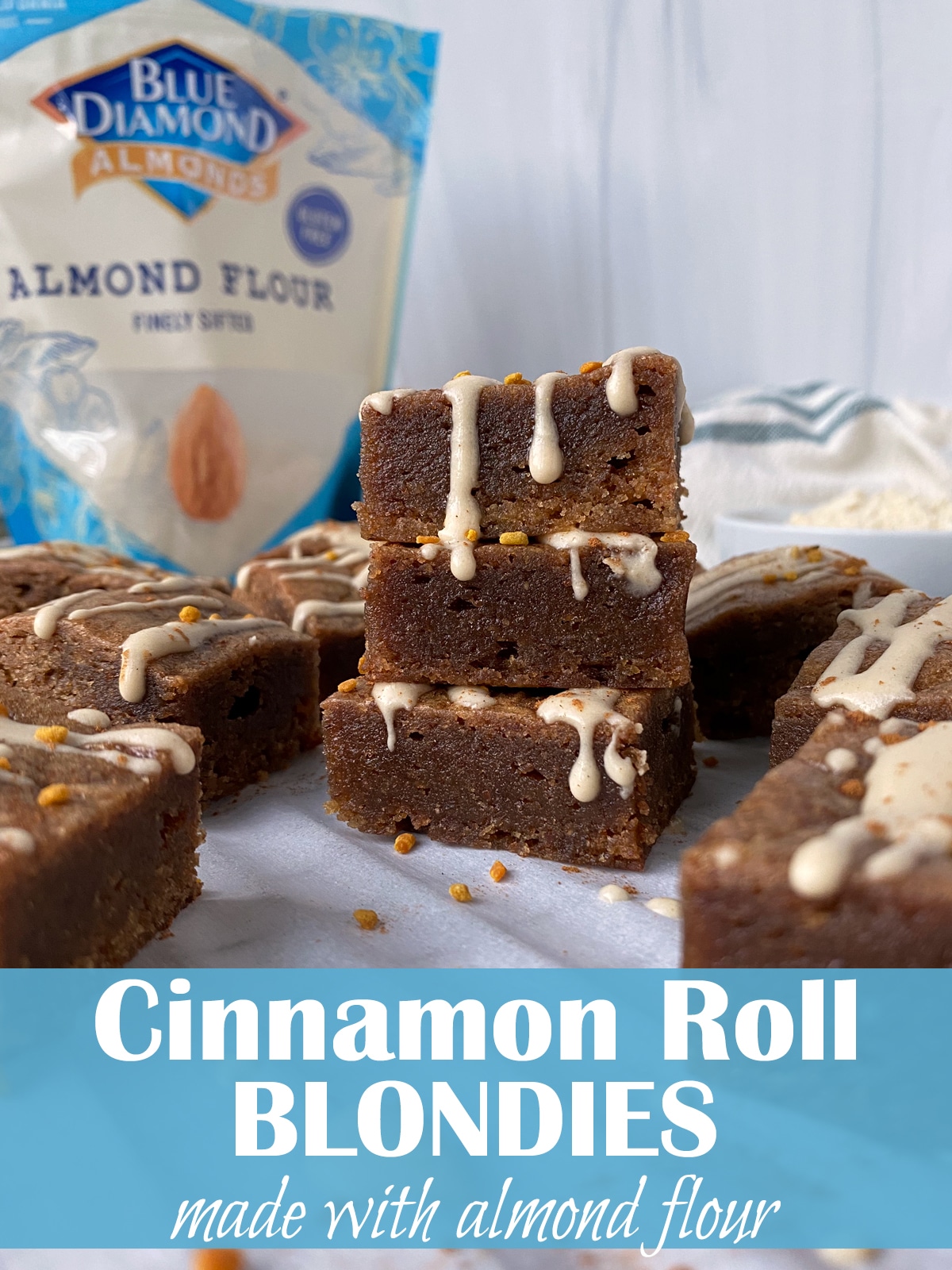 *Use just the cream from a can of full fat coconut milk.  You will want the cream to be room temperature.  If using coconut cream from the fridge, then warm slightly in the microwave. 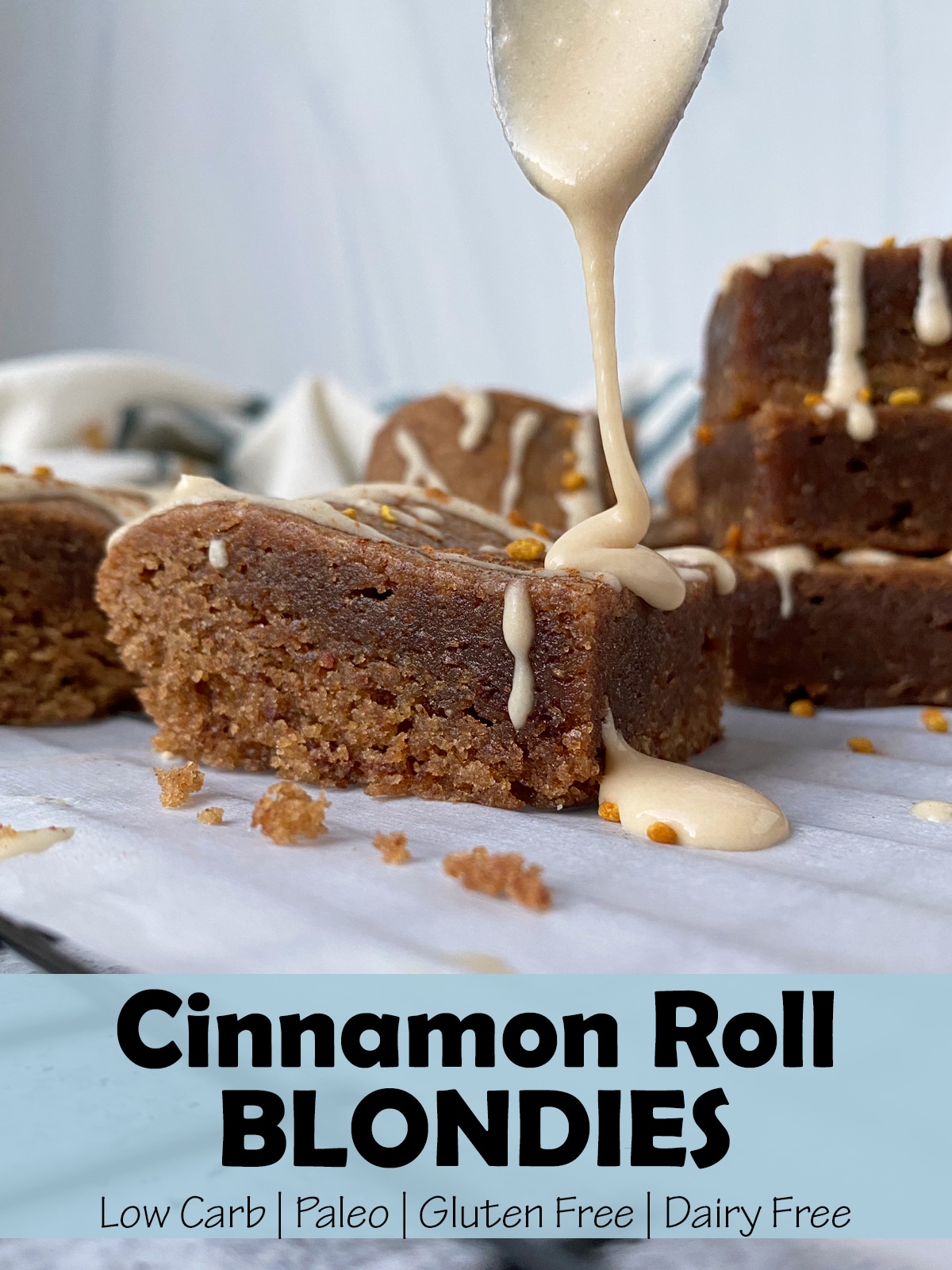